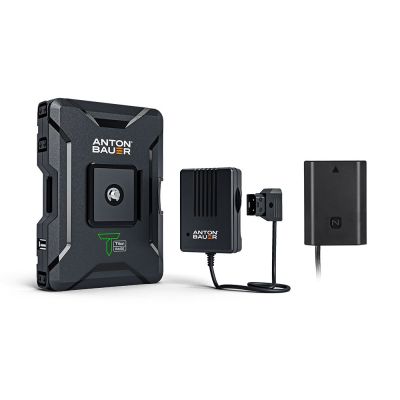 The slimmer, lighter, more powerful power base for compact cine cameras Titon Base is a 68Wh portable power hub designed to deliver hours more runtime than the consumer batteries supplied with cameras in a lightweight, travel-friendly form. Run Blackmagic Pocket Cinema 4k / 6k cameras or similar camera systems for longer than any other Base battery. Base mounts under the camera to create a perfectly balanced base safely away from camera controls. The quick-release plate and Integrated ¼”-20 mounts allow Titon Base to be quickly released from your camera and mounted to a tripod or camera support with a simple click for fast-moving hand-held action.

Lightweight, compact, power distribution hub - Run cameras, monitors, transmitters and more
The powerful yet slim and light Titon Base delivers 68Wh of consistent power to run DSLR, mirrorless and small-form pocket cinema cameras for hours. A single lightweight compact power hub with P-Tap to Sony A9, A7rIII connector with 20” cable powers the Sony A9 or A7rIII camera with your Titon Base Battery. Voltage converter box mid cable adapts 14.4v to standard 7.4v required by camera. Reverse polarity protection is built in so if the cable is plugged in backwards to a P-Tap, it will not be damaged. Titon Base will run cameras more than five times longer than the standard manufacturer batteries supplied allowing you to stay fast and agile. Three P-Tap ports and a high-speed USB port deliver dependable premium power for camera accessories including monitors, and wireless transmitters or even a boost to your phone at the end of a long day.

Quick release mounting plate - Switch your shooting style in an instant
Better connected. Mount cameras to Titon Base in a snap and release in an instant with the built-in quick-release plate providing seamless transition from mounted to handheld shooting. Integrated ¼”-20 inserts allow the Titon Base to be securely mounted under your camera and mounted to a tripod, gimbal or other camera support perfectly placing the center of gravity to create a balanced camera rig that’s easier to operate.

Advanced onboard LCD fuel gauge - Confirm remaining runtime to the minute at a glance
Knowledge is power. With Titon Base there is no guesswork, the built-in LCD fuel gauge displays the remaining runtime of your camera and any other connected device down to the minute and the battery charge level when it’s not connected. Confirm the battery status in an instant allowing you to focus your attention on the action in front of the camera.