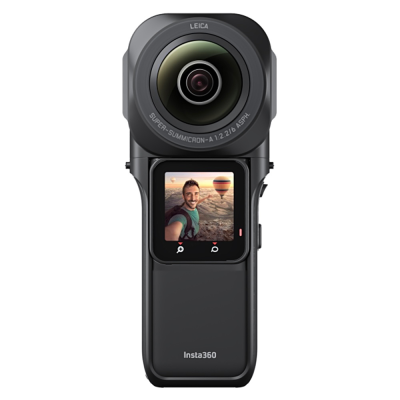 The camera also expands the versatility of the ONE R/RS interchangeable lens ecosystem, adding a new lens option to the product line. ONE R and ONE RS users can upgrade to the new lens using their existing Core.

The ultimate creative tool.
Unbeatable 360-degree image quality in a portable device that's ready to go anywhere. With an interchangeable lens design, it's ultra-versatile and upgradeable too

Co-Engineered with Leica
Partnering exclusively with Insta360, Leica brings its legendary expertise in optical design and state-of-the-art imaging to 360 cameras.

Crisp 6K30fps 360 Capture
Image quality that blows other compact 360 cameras out of the water. Share in immersive 360 degrees or reframe as a traditional flat video for social media.

360 Horizon Lock
No gimbal? No problem. No matter what angle your camera's at, the horizon will always be level without cropping thanks to 360 Horizon Lock

HDR Photo
For even more dynamic range, the 1- Inch 360 Edition can combine up to 9 PureShot photos together, further controlling the highlights and delivering more details

Water Resistant
No need run for cover at the sight of gathering clouds! The 1-Inch 360 Edition is IPX3 water resistant. *ONE RS 1-Inch 360 Edition is IPX3 water resistant only when assembled, locked and secured in the Mounting Bracket. It is protected against light rain and snow, but should not be submerged in water or used for activities involving high-velocity water such as action sports in rainy weather, surfing or waterskiing

Long-Life Battery
The new 1350mAh Vertical Battery Base provides you with the all the power you need for high-level productions. *Note: The NEW vertical battery base has an increased capacity to power the lens and is designed to fit the new vertical mounting bracket. The original ONE R vertical battery base isn’t compatible.

Quick Reader
Speed up your mobile editing workflow with the Quick Reader. Plug it into your camera to save files directly onto its SD card, then transfer them to your phone in lightning quick time.

Live Streaming
Broadcast to every corner of the planet in stunning detail. Reframe to control the perspective or immerse your audience in 360 live streaming.

Webcam
Crisp, clear calls whether you're in the office or at home. Forget about awkward huddles over your computer screen—ONE RS captures everything in 360 split-screen.