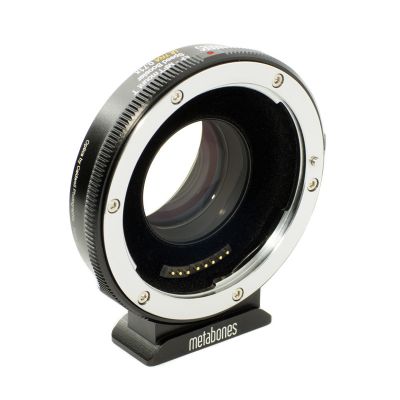 Like the ULTRA series for Sony E-mount, the new Speed Booster ULTRA m43 uses an advanced 5-element 4-group optical design incorporating ultra-high index tantalum-based optical glass. However, the new design is specifically optimized for the Micro Four Thirds sensor and filter stack, and as a result achieves an astonishing level of performance that sets a new standard for focal reducers.

Like the revolutionary original Metabones Speed Booster® announced in January 2013, the Speed Booster ULTRA m43 has a magnification of 0.71x, and so it effectively reduces the crop factor of mirrorless Micro Four Thirds mount cameras from 2.0x to 1.4x. However, the new ULTRA design makes very effective use of exotic materials at the furthest limit of glassmaking technology, and as a result is almost perfectly corrected for use with all fullframe SLR lenses regardless of aperture. The Speed Booster ULTRA m43 will also work extremely well with many DX and APS-C format lenses provided the image circle of the lens is large enough. Optical performance of the new Speed Boosters is so good that the MTF of any lens attached to it will be improved. Even the latest generation of ultra-high performance SLR lenses such as the Zeiss Otus series can be improved by adding a Speed Booster ULTRA m43.

Autofocus with an Optimum Balance of Accuracy, Speed, Consistency and Reliability
New in Speed Booster ULTRA for Canon EF Mount to Micro Four Thirds is autofocus on Panasonic camera bodies, subject to certain limitations. We are pleased to report that Panasonic Micro Four Thirds camera bodies are capable of autofocusing accurately even if the maximum aperture of the Speed Booster and the lens combined is in the sub-f/1.0 range. Although our first and foremost priority is accuracy, we are able to make great strides in autofocus speed as well, which is significantly faster than a DSLR Four Thirds lens on a Panasonic Micro Four Thirds camera (with adapter), or our E-mount offerings on Sony cameras prior to Alpha 7R II.

Limitations
– EF-S lenses require modification to fit (but third party DX lenses can be used without modification)
– No autofocus support for JVC and Olympus
– AFC (continuous AF) and AFF (flexible AF) modes are not supported
– No 24p video AF
– Video AF may hunt more than a native lens
– No support for in-camera correction such as peripheral shading, CA and distortion
– Designed to cover an 17.3mm x 13mm sensor but not enough to cover Super35 so JVC GY-LS300 needs to have VSM configured to 80%

Pentax K
Every Pentax K-mount lens has a protruding fin and an aperture lever. It does NOT fit.