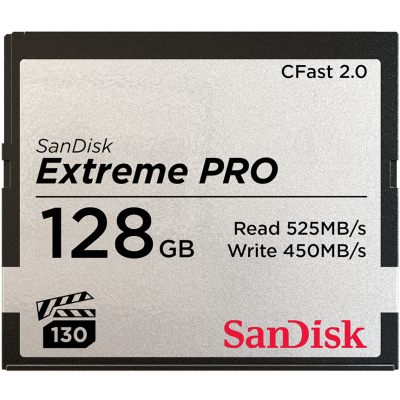 A New Level of Performance for Cameras and Camcorders
The SanDisk Extreme PRO® CFast™ 2.0 memory card delivers the high performance that broadcast, cinema, and photography professionals demand today. The card has the speed, capacity and performance needed to record cinema-quality 4K video (4096x2160p)1. It delivers write speeds of up to 450MB/s* and data transfer speeds, up to 525MB/s*. With a video performance guarantee of 130MB/s (VPG 130)*4 and 128GB to 256GB** of storage capacity, this is a great memory card for professional cameras and camcorders.

Tested Under Extreme Conditions
This memory card can operate in temperatures ranging from -4ºF to 158ºF (-20ºC to 70ºC).

Easy file recovery with rescuepro deluxe software
The card comes with a RescuePRO Deluxe data recovery software download offer*3. This software makes it easy to recover files that have been accidentally deleted.