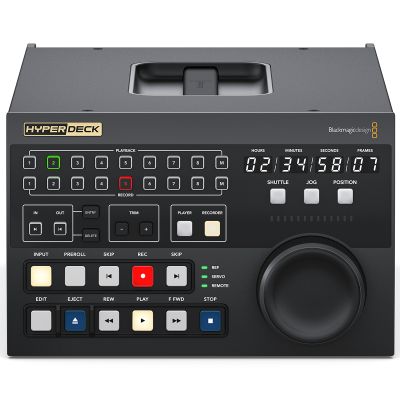 HyperDeck Extreme Control gives you traditional deck control features with a built in editor for automating the ingest of legacy videotape based programming. Combined with HyperDeck Extreme, you get a professional deck solution that’s exciting and fast to use. There are transport control buttons, timecode, deck status, plus a large search dial with electronic clutch for jog, shuttle and positioning. Controlling up to 8 separate decks is possible using standard RS‑422 ensuring compatibility with virtually any type of deck! It’s even possible to edit between different video standards, so you can up convert old 4:3 interlaced SD masters to 1080p HD in 16:9 via a Teranex Express converter.

Traditional RS‑422 Broadcast Deck Control
The most popular control connection used on broadcast decks since the early 1980s is the RS‑422 protocol. Originally developed by Sony, RS‑422 is used on almost all broadcast gear.