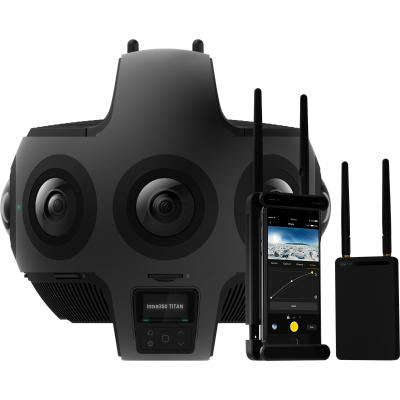 Unparalleled Clarity
Titan is the first unibody VR camera to shoot at 11K mono and 10K 3D. VR has never looked this real.

Turn it up to 11
It takes a lot of pixels to capture every angle at once. Titan sets a new benchmark with 11K resolution and ample 3.3-micron pixels. That's seven times higher than 4K.

Day or Night
Superb low-light performance puts Titan in a class of its own. Capture crisp, vibrant, noise-free VR, from dusk till dawn.

Not in the shot, but still in the action
Titan comes standard with Insta360’s Farsight live monitoring system, consisting of a transmitter and a receiver that can be easily attached to a phone or tablet. Using Farsight, VR filmmakers can easily preview and control their shoots remotely. VR directors used to have to yell “action” and then jump behind a tree to avoid ruining the shot. Farsight saves them the sweat.

Deliver what you shoot
Ultra-high-res VR content presents a distribution challenge. Most playback systems aren’t ready to decode immersive video at higher than 4K, let alone 11K. CrystalView, Insta360’s proprietary playback tech, lets creators deliver what they really shot. It renders in real time exactly the part of a video a viewer is watching – with no computing power wasted on displaying what’s behind their head — so that even mainstream smartphones can play back full-quality Titan content.