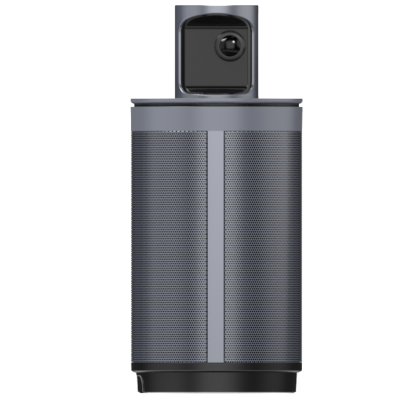 Kandao 360° all-in-one conferencing camera gives you a true face-to-face meeting experience by delivering 1080P HD video with crystal clear audio. Combining a 360° camera, 8 omnidirectional microphones and 2 full duplex speakerphones in an affordable package, Kandao 360° video conference camera offers the feature of auto-focus that is unique at this price point. Plug and play and compatible with various video conferencing platforms, it offers a simple to use, high quality audio and video solution for a remote meeting of any size.

Intelligent Tracking & Auto-focus
Powered by cutting-edge AI technology, Kandao Meeting’s video conferencing systems automatically focuses on the active speaker. When there are different active speakers engaged, it will split the screen with a 360° wide angle view displayed on top and close-up shot of active speakers below. It can also dynamically recognize and follow whomever is speaking with smooth panning in “Presentation” mode.

8K Capturing & 1080P Streaming
With customized Ultra-HD fisheye lenses, Kandao 360 ° conference camera gives you a wide field of view and ensures you to see more clearly in the group video. It captures panoramic video at 8K resolution and delivers 1080p video at a frame rate of 25 frames per second. The wide angle hd video ensures everyone is visible and engaged.

360° Capturing of Any Detail
Designed to make your remote meeting smarter, Kandao 360° conference camera is all what you need for any video conferences. 360 degree camera captures the entire room in 8K resolution without stitching. Rather than crowding around a tiny web camera, all participants can comfortably sit in a meeting room and engage in the video conference.

Omni-directional Audio System
Kandao 360° conference room camera delivers crystal clear audio with 8 integrated omni-directional mics. They pick up sounds in every direction, even far away than 13 feet. The two full-duplex speakerphones also minimize noise and echo, allowing you to easily see everyone’s gestures and clearly hear what they say with the integrated audio system.

360° conferencing systems
Dynamically highlight different participants as they talk with a 360-degree view to show the whole room.

As if You Were in the Same Room
Kandao 360° conference cams with built in microphone and 360 camera provide more than a conference call. It encourages a smarter and more intuitive meeting experience for group conferencing, to let remote workers communicate as if they were in the same room with the team, talking face to face.

Light and Color Optimization
Based on the lighting conditions of the room, Kandao Meeting conference room cameras dynamically optimize exposure and fine-tune skin tones, so you can look great in video conference of any light.