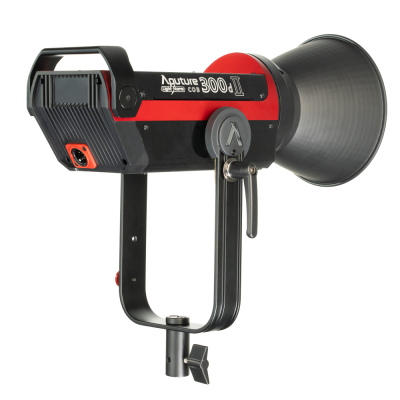 More Output
By utilizing the latest in Aputure COB LED technology, the 300d Mark II outputs a whopping 20% more light than its predecessor. When combined with the Fresnel 2X, the 300d Mark II can produce up to 80,000 lux, approaching the luminance of a 575W HMI. And as always, the 5500K‐balanced 300d Mark II maintains impeccable color fidelity with CRI and TLCI ratings of 96+ and 97+ respectively.

Robust Lamp Head
The 300d Mark II also introduces new design features, while maintaining the same form factor and lightweight aircraft aluminum body as the original 300d. The new yoke allows for 360° of rotation, and when combined with the handbrake locking mechanism from the 120d Mark II, you’ll be able to mount the light in any position, with any modifier.

A Revolutionary Redesign
But the real advancement is in the complete redesign of the control box. By utilizing Aputure’s fan‐less heatsink design, the 300d Mark II’s All‐in‐One control box is now completely silent. Composed of a durable aluminum alloy, with a new concealed antenna and military‐grade paracord strap, the control box is ready to withstand the rigor of any film set. The 300d Mark II control box is also the first product to utilize Aputure’s new quick release plate and clamp
system, allowing you to firmly secure it on any stand, truss, or speed rail.

Click here for a full Compatibility Chart for all Aputure Products